Quantum Leadership: A Story of Next Level Leadership in Project Management (Stage-3)

AUTHOR’S NOTE: In this article, we will be walking you through Stage 3 (Ownership) of The Leadership Model.

A Climb to the Unknown

For those of you who joined us the last two installments, you were introduced to Neo, a project manager at Matrix Corporation. In our last episode, Neo and his project team had entered the Engagement stage in the leadership model. They arrived at a collaborative place where they were bringing their perspectives and insights forward to help answer necessary questions and make the right decisions to address some of the unknowns they had been experiencing in the execution of their project. 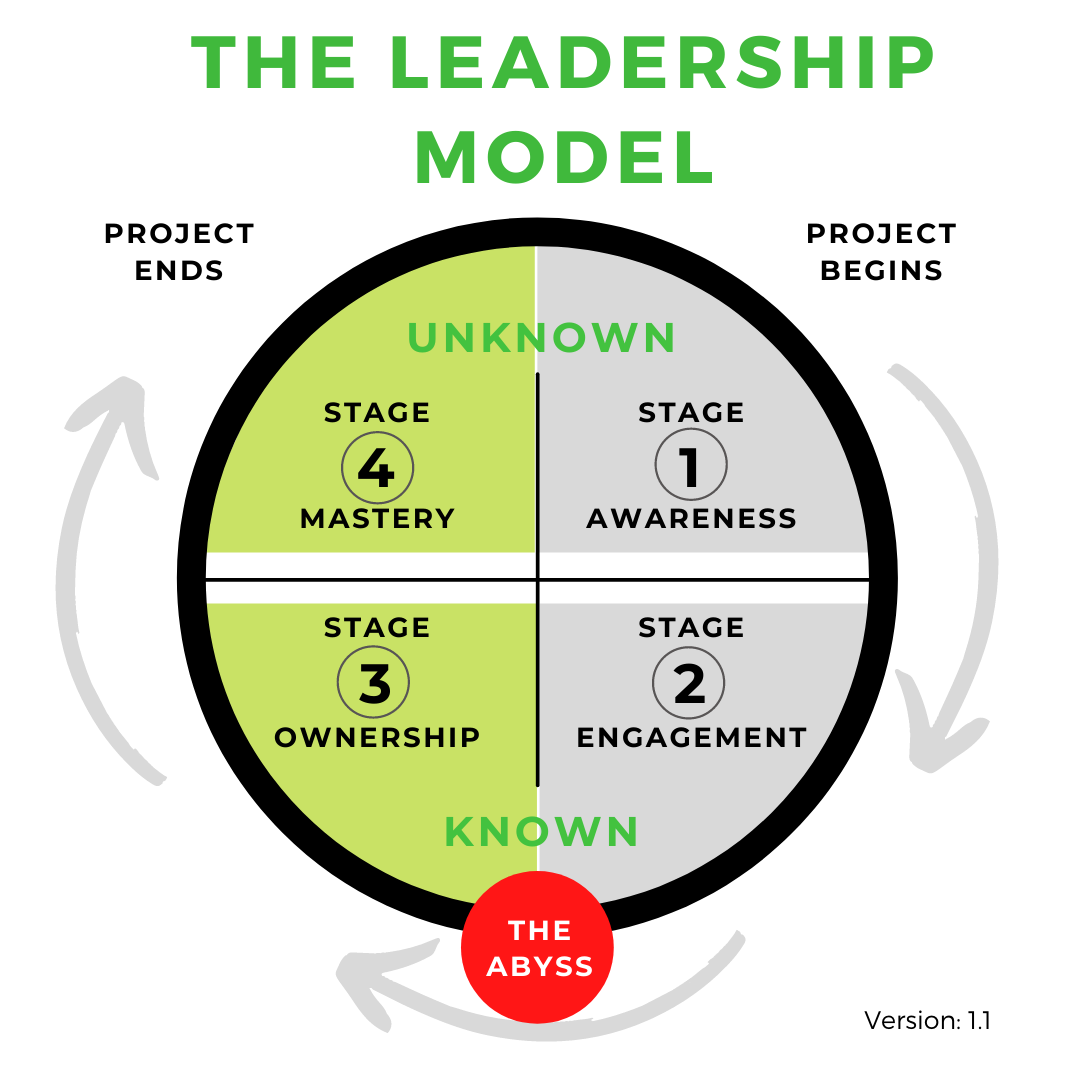 At this point in the game, Neo and his team are reaching the point of their experience that we call The Abyss.

The Abyss can be seen and experienced as a sort of “death of the old.” A letting go of perceived ways of being and doing things and embracing the emergence of the PQ (gut) quotient.

It is a time of trust and faith in what we have experienced and learned, and an opportunity to be open minded to what we still have to learn and experience.  Some call The Abyss a Leap of Faith. This is where we allow ourselves to be transformed by the experiences we have been through in the Awareness and Engagement stages - letting them inform us.

We can “chase” and seek out what resides in our IQ and EQ, but with PQ, we must invite it to advise and enlighten us.

In Geoffrey Moore’s book, Crossing The Chasm he suggests that in order to make a leap or move from the visionary (early adopter) stage to that of the pragmatist (early majority), a bandwagon effect needs to be created to build the momentum allowing for a new de facto standard. In this regard, Neo has begun to propagate his new beliefs, and as the team ascribes to them, they become the default operating standard.  In doing so, the momentum created allows them to “Cross the Chasm.” 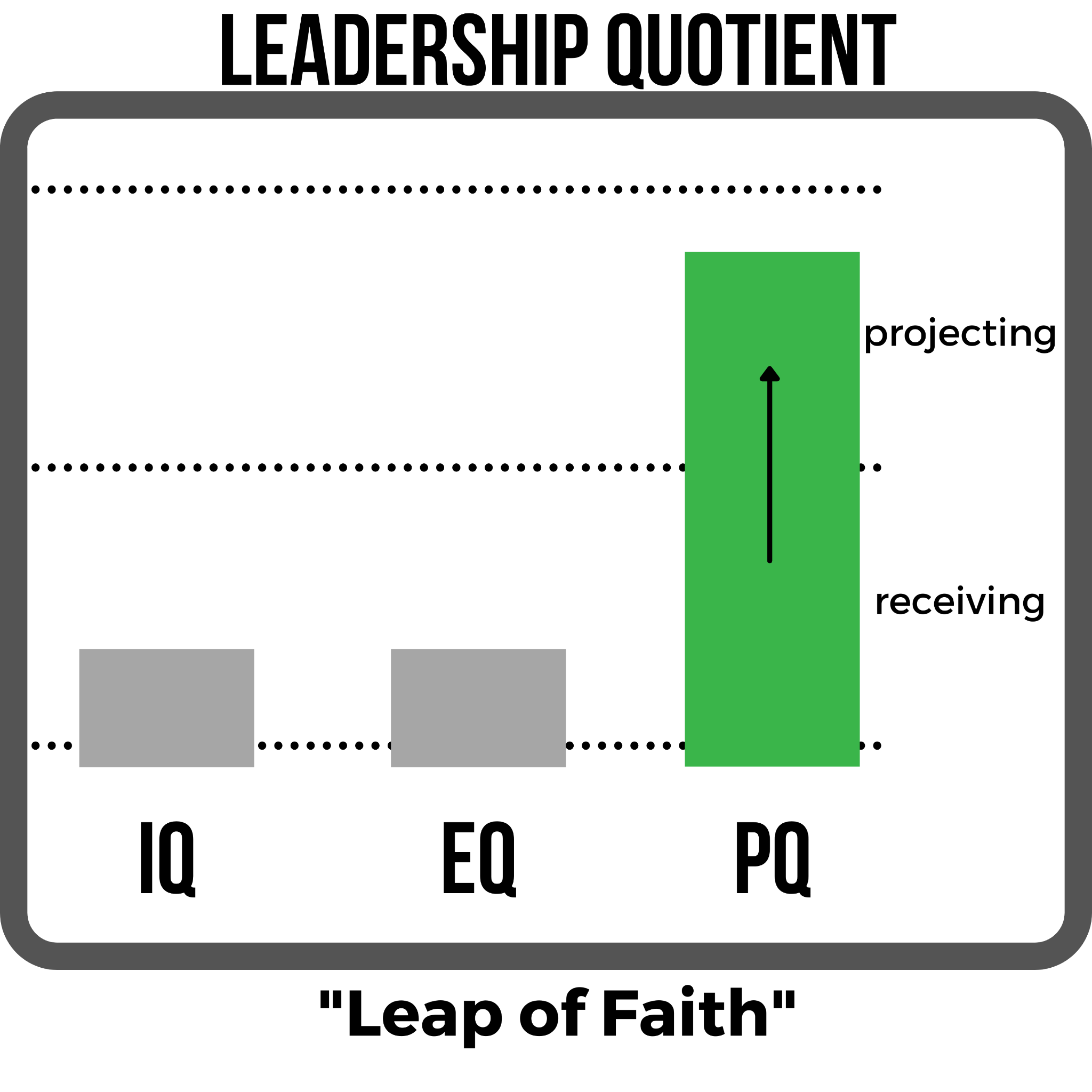 Upon entering the Abyss, Neo no longer views the project the way he did in Stages 1 and 2. He is preparing to fully embrace a profoundly new viewpoint that is arising from his own experience in the trenches dealing with the realities of the project’s development. Little of the awareness that he has gained could have been explained or foreseen because it had not been identified or experienced prior to this undertaking.

A new narrative is emerging and Neo’s understanding of it will become more concrete with his continued release (of control), acceptance (of what is emerging) and discernment (in what he senses is the best way to go). Strangely enough, it is traveling through the Abyss where he is forced to let go of his need to derive information from his IQ and EQ, that offers the clarity that Neo seeks.

Neo considers the recent experiences with this project and compares them with past mountain climbs that he has undertaken. When preparing for his first climb, the driving force behind going to that mountain summit, for Neo, was the promise of seeing profound beauty in the spectacular view that he would have from the top. This would be a perspective or vista that he had not experienced before.

Although always filled with promise, the ascent process is an unsettling proposition. It entails challenges, discomfort and letting go of expectation.

Both his mountain climbs and his experiences with this project have offered similar opportunities:

➤ To practice trusting in himself and his team to achieve their goals.

➤ To approach the work collaboratively, knowing that even in the unknown waters of newness where deviation from the plan is often needed, diversity in perspective, insights and ideas will ultimately lead to success.

➤ To experience the sense of elation and purpose that comes from the accomplishment of overcoming the challenges associated with reaching the end objective.

Neo realizes there's much to be learned from the recent days and weeks working on this project. It has been one that did not align with the original project plan and estimations. Neo recognizes a shift in his own perspective from the concept of winning and losing to where he views things now as winning and learning. This subtle shift in thinking alone is a manifestation of Mastery Velocity; his ability to intentionally move towards mastery by accelerating his shifts in aligned perspective.

At this point, Neo thinks, feels and senses that the learning he has acquired is significant. As he moves into the third stage of development, the sharp curve of learning begins to subside, and physical progress begins to accelerate. Neo smiles. The mountain top is in range.

When moving into Stage 3, Ownership, there is a weariness associated with constant and consistent application and effort. Upon exiting the Abyss, things seemingly synchronize. There is a holistic understanding of the system that allows a broader perspective that incorporates the lessons learned. The shifts in insight and approach are now integrating into routine thought and action.

Upon entering the Ownership stage, Neo and the team’s continued investigation has permitted them to graduate from a space of “navigating in the dark” to a reality that they can communicate with an emerging clarity. This clear understanding of what they have done and generated allows the team to come up with new concepts, models, workflows and processes. Ownership becomes the stage where we create “the new norm.”

As Albert Einstein once said, “if you can’t express it in a sentence, you do not understand it”. The ability for the team to convey their process succinctly means the precision and accuracy of thought and understanding has reached a level of maturity.

An important side note: Each incremental step in this process is an advancement in understanding. Oftentimes, we can get frustrated with things moving too slowly and take the stance,“Ok, enough thinking about it! Let’s do it!” The fact is, this refinement and iterative process is critical for moving from the abstract to the more concrete. When it comes to project management, this is where documentation becomes key, version control on documents and processes is essential for proper instruction, adherence and duplication and keeping track of any changes to shared language and overall process becomes crucial.

At this point in leadership development, PQ is stabilizing. This allows room for IQ and EQ to halt their descent and reverse direction. Complete consciousness is emerging as PQ allows IQ and EQ, through the process of documenting and languaging, to see evidence of the existence of the new narrative. IQ and EQ have reached an inflection point where the project narrative has moved through the “blind faith” stage and has entered the space where all intelligence quotients can access it. 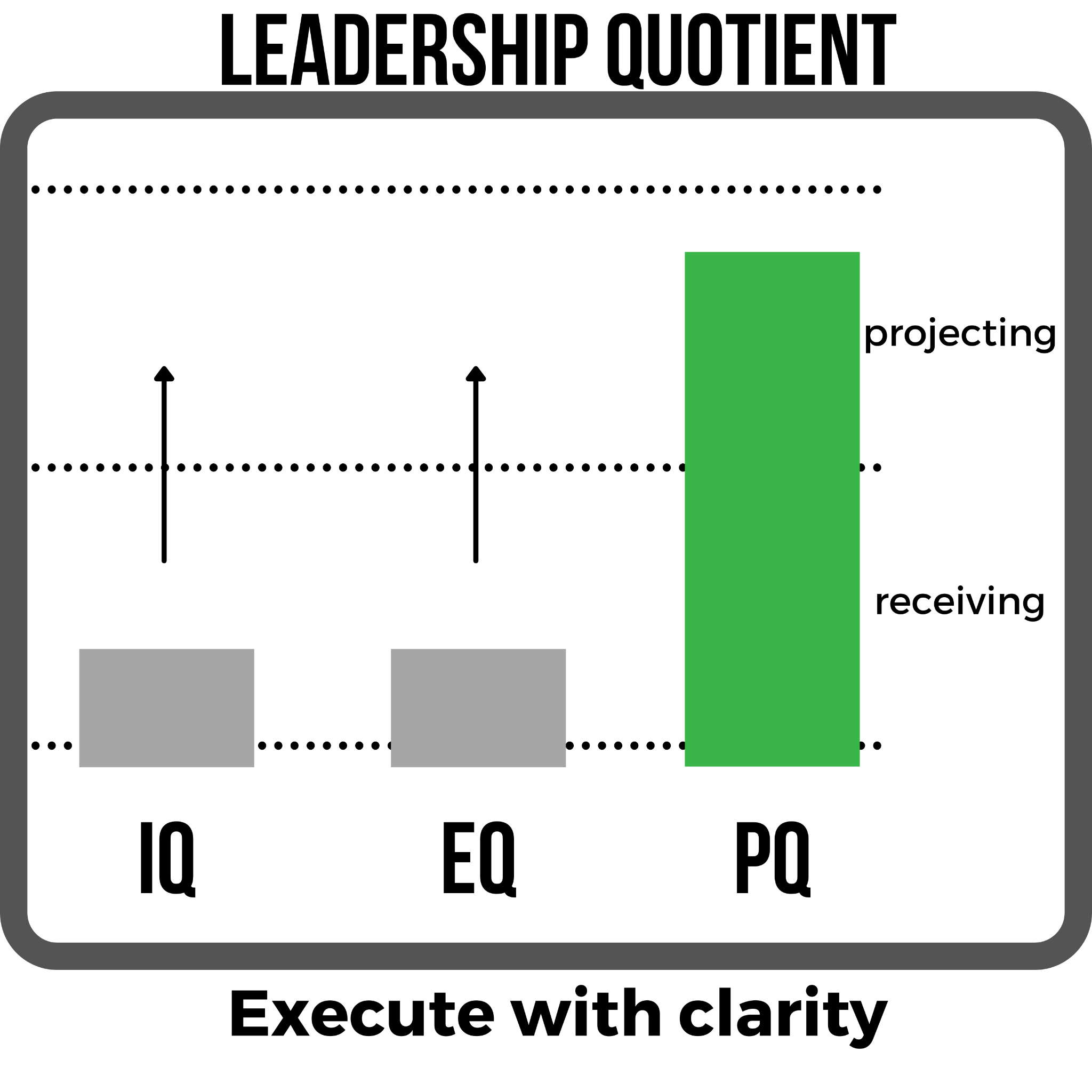 A potential pitfall at this stage is overconfidence. The solidification of what we are coming to know is still new and developing. Having a sense of knowledge without testing it out halts our ability to develop true confidence, therefore perceived confidence or what we can experience as overconfidence based on a clarity in what we think, feel and sense is something of which to be aware. This is where we can believe and declare the process final and complete. Yet, this would be a hasty assumption.

Another common problem is impatience. We have been through a lot and simply want to reach the finish line. Often, due to the scope of the “unknown” descent in Stage 2, project budgets and overruns are commonplace, and therefore there can exist limited patience to finish strong. This, similar to overconfidence, creates a hastiness that can backfire on us. Just as the project narrative had to die and be reborn, so must the expectations of the project. Much of the time, we are not just talking about a slight shift in expectations. Rather, what is often called for is a full restructuring of the expectations. This, understandingly can be a difficult and challenging time for any project and team, therefore increased patience and inspection will be needed.

There is a saying that goes, “Practice does not make perfect. Perfect practice makes perfect.” In this case a hasty approach to the finish line often means that an imperfect practice becomes institutionalized. When venturing through the developmental period of the Ownership stage, move forward hastily at your own peril.

As Neo’s project begins to make the ascent to Stage 4, Mastery, team alignment and depth of understanding around the scope, purpose and value of the project is all approaching maturity. In the next phase of the cycle, the exit from Ownership into Mastery is seemingly a simple step based on the knowledge and momentum that has been built. But again, we must remember “perfect practice makes perfect”. This transition to Mastery is, perhaps, the most nuanced and requires of us a deeper dive and surrender.

In our next and last installment of this series, see how Neo approaches the codification of what he and his team have learned from the prior 3 stages and realizes what they all must be willing to lose to create the ultimate win-win. 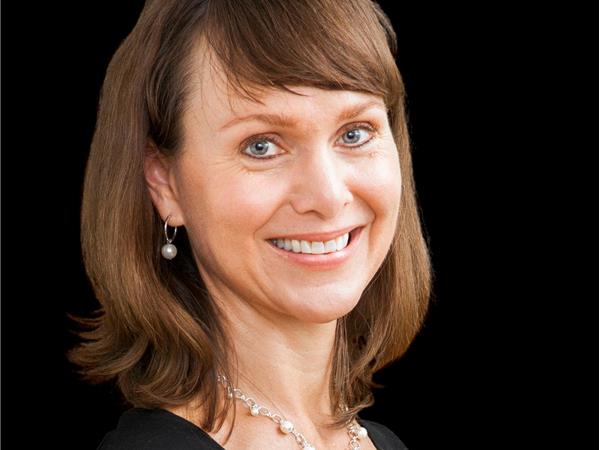 Traci Philips is an Executive Leadership & Performance Strategist and supports visionary business owners and corporate executives to reach a higher degree of fulfillment, potential and purpose in their careers and lives. She excels at digging in and uncovering a client’s Zone of Genius, as well as identifying what is holding them back, many times in ways they are not aware. She is well practiced at helping clients improve their communications, resolution strategies, decision-making and establishing a sense of balance and unwavering confidence that is essential for leading during times of change and when the stakes are high.

Being one herself, Traci understands how visionaries think and operate. She helps leaders understand and define their unique lane, how to operate and stay in it, and she works with them to build the mental framework, behaviors and communication skills necessary to engage with their partners, teams and clients in meaningful, effective and positively influential ways.

Traci is the co-host of Eavesdrop in the Moment, a bi-weekly podcast that discusses current trends and leadership. Her book, Looking In: Discover, Define and Align the True Value of Your Life, Leadership and Legacy is helping leaders around the globe increase their confidence and self-identity to meet leadership demands and their personal performance potential. 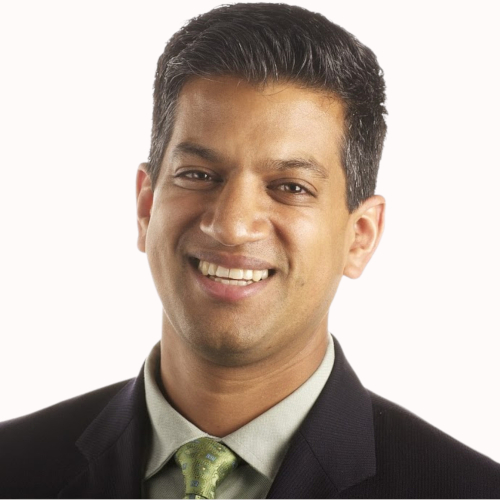 Support 10,000,000 people to unlock their greatest potential at their place of work.

Over the last 25 years, Vinay Raman has been a leader in the analytics and leadership space. His professional work has included empowering warfighters, in high and national-security situations to make better and faster decisions when in theater. This work has been applied across various agencies like the Department of Defense and Homeland Security, creating greater effectiveness through data and analytics.

When coupled with his experience in helping small and large companies grow, there was one key insight to the success of any organization: people’s desire and passion.

After many years of analysis and experience with Machine Learning and Artificial Intelligence he came to a realization that capturing people’s hearts and passions is the true unlock to an organization's greatest potential. He is focused on empowering leaders to unlock their greatest potential as well as lifting their people and employees to their greatest heights. His current company, CAARMO, is a platform that allows company leaders to take action by using their existing data effectively to empower all to ultimate effectiveness. He has even been told by some employees he actually practices what he preaches! (NOTE he is curious as to what their motivation was in saying that)

To date he has personally founded, built or run 6 companies from 15 employees to over 180. He holds undergraduate and graduate degrees in Mathematics, Computer Science and Artificial Intelligence. He currently resides in North Carolina after 22 years in the Washington, DC area with his beautiful (and smarter) wife and three children.