Schedule Performance Index (SPI) is the ratio of earned value to planned value at a given point in time to measure the schedule efficiency reflecting how quickly or slowly project work is progressing. An SPI lower than one indicates the project is behind schedule. An SPI higher than one indicates the project is ahead of schedule. Formula: SPI = EV / PV Where: SPI = Schedule Performance Index; EV = Earned Value; PV = Planned Value

List
|
pmmagazine.net - Stakeholders... The essence of projects [December 2019 edition]
28864 Likes
Exclusive! It's here were pmmagazine.net adds a little bit of flavor and touch to project management by having articles exclusively written for us based on each theme's edition.

To start, let’s make sure we are all on the same wavelength, as there are some variations in defining “stakeholders” between various standards and methodologies. Personally I like the ISO21506:2018 definition of “stakeholder: person, group or organization that has interests in, or can affect, be affected by, or perceive itself to be affected by any aspect of the project. 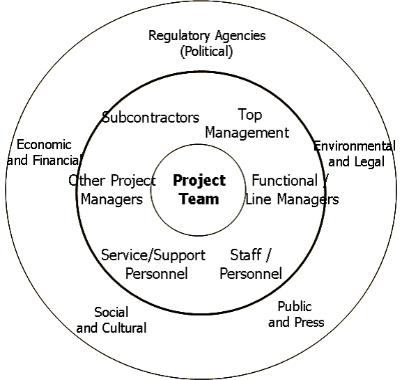 Based on this definition, a lot of people acting in personal or as representatives of a group or organization will be stakeholders in any given project. This will require a lot of effort to deal with all of them – however the effort is certainly worthwhile because, despite all the machines, tools, techniques, methodologies, at the end of day projects are done by people (team), with people (partners) and for people (clients).

People will make or break a project, and people are complex beings that perceive facts or situations through their individual frameset of values. Past experiences, accumulated knowledge and preconceptions alter people’s perception of reality and makes them sometimes very difficult to understand, and even more difficult to obtain from them what the project needs – either increased support or less resistance.

Most project managers focus on stakeholders’ needs, but what about our needs as Project Managers - the ones with the head on the chopping block if anything goes wrong? Even more when dealing with resistant stakeholders, we cannot be passive and wait to see if the axe will fall, we must be proactive and take control of the narrative to make sure that no stakeholder swings the axe, because there’s always going to be at least a few ready to do so!

The first step to effectively deal with negative stakeholders is to actually acknowledge them! We know that people don’t really like to be publicly labeled as negative, so to not antagonize them even more most project managers avoid capturing the correct information in the planning documents – but if the information is not trustworthy, how good the resulting plan can be?

Using a classic salience model for stakeholders’ classification based on their power (ability to impose their will), urgency (need for immediate attention), and legitimacy (their involvement is appropriate) we can define a starter plan for dealing with stakeholders’ resistance. But first a brief summary of the salience model:

Now it’s time to focus on what you can actually do as project manager to achieve these objectives. Of course, in most projects with a large number of stakeholders, it’s most efficient to push as much as possible to group activities targeting an entire class of stakeholders, and focus individual activities toward those that can really derail the project.

Because group activities target a diverse audience, it is very important to be carefully crafted to reach a wide range of personalities but focused on a specific outcome that what you want to obtain. Of course, people react differently to group activities based on their own particularities, so their efficiency will vary from person to person. At least for key stakeholders that could make or break the project, there is a clear need to add a personal touch to minimize their resistance and eventually turn them around. Some of the most common activities are:

In order to plan for the best suited group or individual activities you also need to understand and assess their negative attitude: is their resistance passive by not providing the support they should, or is it aggressive resistance where they take action against the project – such as purposefully not disclosing relevant information, inventing rules out of thin air that block progress, or even withholding approvals even if all reasonable criteria have been met.

The first instinct is typically to shield the project from the impacts of the negative behavior, either by taking avoidance measures (provide information targeting their complaints) or by rallying support from positive stakeholders of equal or higher power to impact the project. However, quite often is more efficient to go in offensive and try to change their attitude through direct or indirect influence, to make sure they actually see the good parts, the accomplishments, the progress, and not focus solely on the unavoidable negative elements.

We also have to remember that the stakeholders are continuously changing throughout the project life-cycle – new stakeholders get involved, and some may not be interested in the project anymore. Moreover, the level and type of engagement varies based on their needs, interests and potential impact on project success, and all these are changing in time as the project evolves from phase to phase. This requires a delicate balance between group and personal activities in order to manage their perception about your project not only based on stakeholders’ classification, but also the changes throughout the project’s life-cycle.

While the plan – like any plan – will be particular to the specific project and its stakeholders, the following figure shows a typical starter plan to deal with negative behaviour based on the stakeholder’s classification. Of course, the plan will evolve and specific activities (name, date, description etc.) will be added, but this could help you to get going: 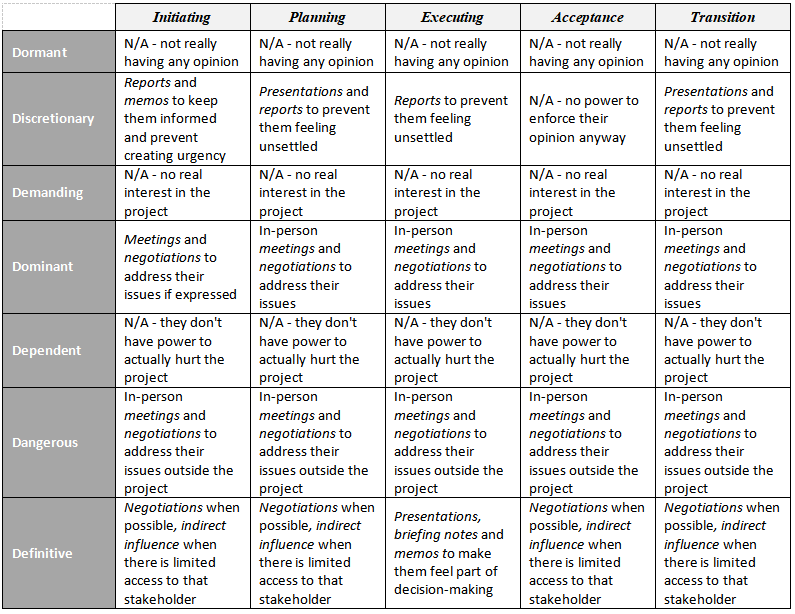 Engaging stakeholders based on the plan described in the previous section sounds easier to do than it actually is. Because we’re dealing with people, no plan can ever anticipate everything – you can plan based on their typical or usual behaviour, but what if someone has a “bad hair day” when you actually get to it? Like any plan, it will have to be re-assessed and adjusted during execution – however, having even a generic plan is indisputably better than reacting instinctively to negative attitudes, particularly in the heat of the moment.

The project success is in the eyes of the beholder -  not given by a checklist or formula assembled in the “triple constraint”, but a subjective perception of each stakeholder about how his/her particular needs were fulfilled by the value produced by the project. And as the negative voices are louder (even if fewer) than the positive ones, you cannot ignore them hoping they will go away because they will influence the perception about the project. You must invest time to deal with resistant behaviour, and I hope that the above provided at least a starting point.